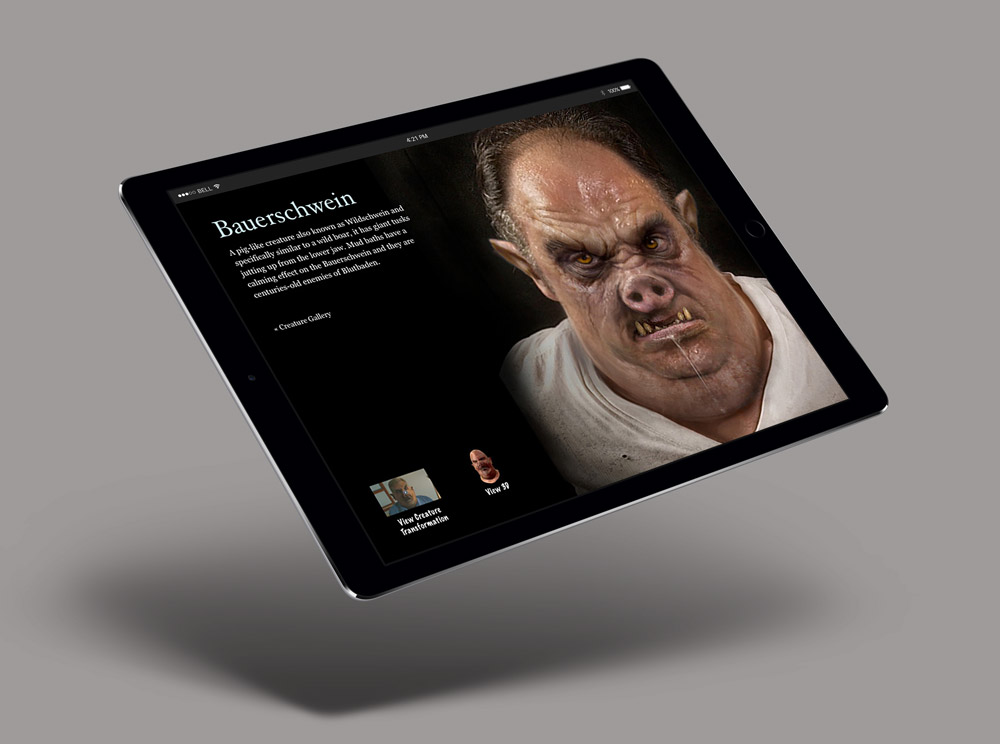 Project: Extend the Design of a TV Brand

Project: Extend the Design of a TV Brand

NBC wanted a unique way to promote their fantasy TV show, Grimm, during the off-season to keep fans engaged. It was also the first NBC project to create a "second screen experience" to bridge the gap between fan and screen. In my role as Creative Director, I had to come up with an effective solution in a short period of time.

With only three weeks to launch and three months between the seasons, the timeline was short. The client wanted an app, but developing one (or multiple—one for each platform) wasn't a viable option. So I chose the eBook format that would deliver an interactive app-like experience and could be developed in a fraction of the time.

Since this was a new market and I had never seen the show, I was curious and began researching fan sites and the online cult following. The fans were intrigued by the show, but due to its secrecy and style, deeper information about the lore, the characters, or the creatures was hard to come by. They wanted a deeper dive into the backgrounds and stories. They asked, “What are these creatures and where can I find out more?”, “Where is the series filmed?”, “Who are the unknown actors?”, “How do they create the effects?” and other character histories and plot details. These kinds of questions and discussions helped formed a Mental Model of a typical fan (aka "Grimmsters).

I came up with the strategy of creating an "Essential Guide" that would both provide the lore the fans wanted and get new fans up to speed for the upcoming season. They could also use the book to complement their TV viewing to look up details of the story and characters.

Grimm is a show with a lot of secrets and a loyal fan base. The creatures are the highlight of the show and they appear in usual places without much explanation. Fans wanted to know more about how they came to be and if they will recur during the season.

NBC provided us with some assets to work with, but couldn't share much background information except a prop diary used on the show, which contained sketches and other "historical" information about the creatures (aka "Wesen"). It was limited and that meant I had to binge-watch all 22 episodes of the first season to meticulously document every possible detail. All of this information and the assets they provided were organized in a Content Matrix to track and cross-reference. Then I held a brainstorming session with the client to come up with ideas for interactivity based on our strategy.

With all this information, I was ready to move into the visual design phase and created two concepts:

Both would work well with the strategy and the client preferred the "Modern" approach. In hindsight, it was the quicker approach and required less custom art.

I wrote the copy for each section and had the show writers approve what I’d written. I even extrapolated ideas and storylines from the show they hadn't thought of and fed back into their writing and character backgrounds for future episodes.

One of the ideas from our brainstorming session was to add a sneak peek to tease the upcoming season and the new creature that would be revealed. Fans who downloaded the book would find out ahead of time and also experience the following:

All of the content and interactivity/wireframing was prototyped and built in the same workflow. Nothing went to waste in the process.

We launched the book on Apple, Amazon, Google, B&N, and Kobo devices. To promote the launch, NBC ran TV commercials during the show and when marketing the upcoming season. We also gave interviews about the making of the book and gave insider tips on fan sites where they could find "Easter eggs".

The fan response was amazing and universally positive. The book was free and packed with content not available anywhere else. It was the number one book on Apple iTunes for nearly three months and highly rated in all the digital stores (with almost a million downloads). According to NBC’s numbers, viewership nearly doubled from 6.3 million when the next season started.

The project was so successful we did a new version of the book the following season, which included a Twitter Q&A with the cast, more behind the scenes details, and cross-promoted other NBC shows with exclusive content.