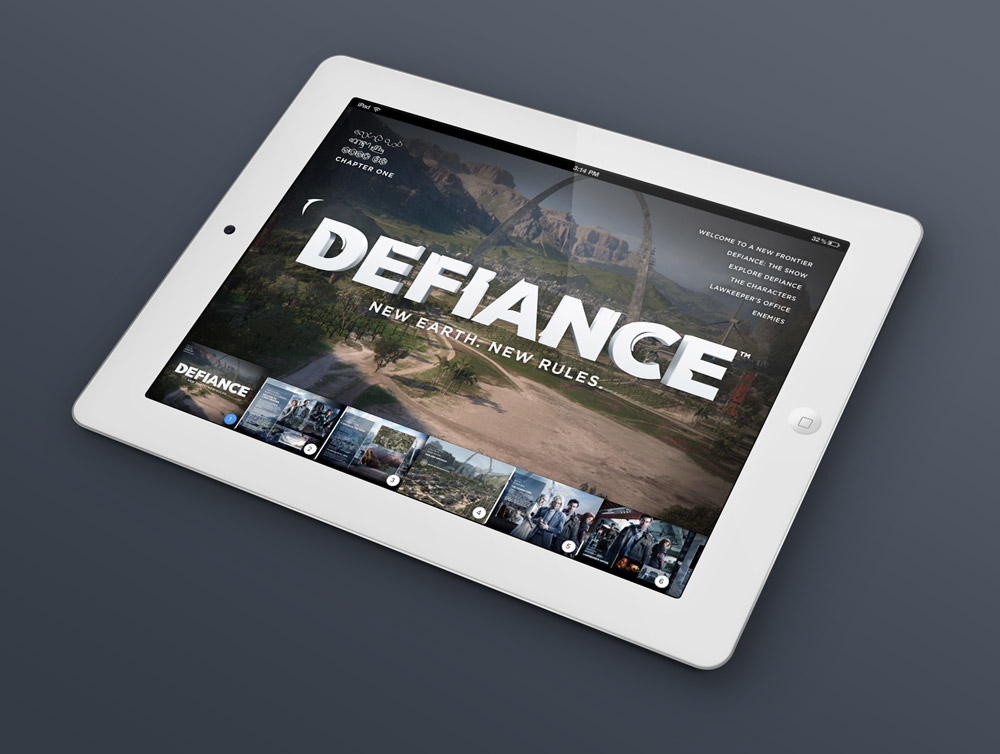 I was approached by Syfy and Trion to create an app strategy for the launch of their groundbreaking science fiction TV show, Defiance. Five years on the making, it is set on a post-alien-invasion Earth and the series follows characters both human and alien trying to survive and protect their freedom.

Defiance was a truly groundbreaking series, delivering an immersive, cross-platform experience that transcended the television screen in a way that viewers had never seen before.— Scott Stewart, NBCUniversal

Syfy was planning an online game for Sony PlayStation and Xbox 360, so I took the transmedia launch strategy a step further. I built on the 360º strategy by interconnecting the online game, TV series, and a new app all together into a single experience. it was the first such launch strategy of its kind.

Social media played a key part in the strategically playing Defiance into conversation about pop culture. Ads were timed alongside key episodes of shows like The Walking Dead and American Horror Story, film premieres like The Hobbit, and throughout the Hollywood awards season.

The plot progressed simultaneously in all three media forms. In the app, users could read show background information and use interactive tools like a language translator, but also find cheat codes, which helped their character become more powerful in the game. That might, in turn, make a character popular enough to write into the TV show. Alternately, an explosion might go off the in the game and the aftereffect of which would be experienced in the app or TV show. The three parts worked together in harmony creating a seamless and engaging experience for fans.

The pilot episode was viewed by almost 3 million people, far above average on Syfy, and was a social media success. There were over 200,000 preorders for the video game and the free app had over 1 million downloads.

The team set high Key Performance Indicators (KPIs) for measuring the success of the campaign. Throughout the process, they were able to work with the research team to measure viewers’ intent to watch, which is usually something they don’t start measuring until weeks (as opposed to months) before the show. The campaign met its benchmarks every month except one, but even that didn’t lower expectations. By the date of the premiere, Defiance had 250,000 Facebook fans.

Statistics from social media research confirm that viewers were using social channels to talk about the show. On the night of the premiere, Defiance received more than 10,500 mentions on social media sites between the start time at 9:00 p.m. and 1:00 a.m. the next morning. In addition: